Article by Cyclosprint about the new team translated

Thx Maartje (and Eva )!
Nothing really new here: this article is a patchwork of official press releases already published also here. But it give s a whole view of the new team puting all pices together. 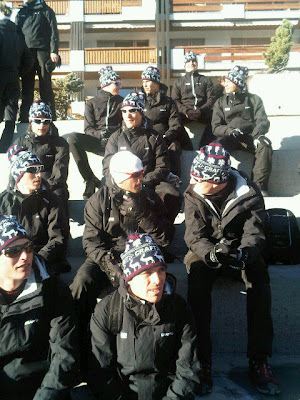 Note that here Jakob isn't amo nght the helpers for the Tour but a part as a leader for the Giro: he denied, but we'll see. Probably he will race the Giro without pressure going for a stage or a good GC but without fighting for the victory and saving himself to give all in the Tour.

BDW Andy is so serious again in Crans -Montana pics...

When the smoke around the team is gone

The mystery around the Luxembourg Cycling Project

Manager Brian Nygaard and Kim Andersen have done their job. Everybody talks about the new team, but they ensure themselves that new information gets released in little parts. Drop wise. And of course in this way everybody hang on their lips. With names as the Schleck brothers, Cancellara, Voigt, Gerdemann and the Belgians Wouter Weylandt and Monfort, you can’t avoid the team.

Luxembourg Pro Cycling Project still has to appear at the start for the first time, but it’s already now number one in the UCI-rank. So the team was assured of a ProTeam – license for 2011, and even got a license for four years from the commission. No doubt this suits totally a team of stars like this one. “Everyone in the team has worked very hard to make this possible. You can contract the best riders of the world, but you also have to get the administration and finances in order”, they said themselves.

Saxo Bank has gone… And comes back.

In 2009, Brian Nygaard left Bjarne Riis to get to work at Team Sky. And Kim Andersen could leave Saxo Bank halfway the season after six years of true support, when it became clear he was working on setting up a new team together with Nygaard. Gradually it leaked out that also the Schlecks would go to that new Luxembourgish team and some teammates would join them. The team might be tinted Luxembourgish, though there is no gouvernmental money involved in the project: the total capital of team comes from private sources. “A business man will support the team financially, so the existence of the team is assured for the coming five years”, explained Andy Schleck. The Schleck brothers have both signed a four years’ contract. The business man gets several little sponsors at his side. In this context, names like Belgacom – they have a Luxembourgish connection: Tango – and Jabra, a producer of headphones of telecommunication, have been whispering around. The Danish Jabra was named before in the rumor mill about a new sponsor of the team of Riis. He was searching for a replacement of Saxo Bank that was about to quit sponsoring. But when Alberto Contador signed into the team, Saxo Bank came back to her decision and stay main sponsor. So Jabra remained in the cold.

The changeover of the Schlecks, the icons of Saxo Bank, was a hard one to take for Bjarne Riis and it clearly had caused some tensions within the team. The peak of that was the suspension of Andy Schleck and Stuart O’Grady after a night out during the Vuelta. The “betrayers” couldn’t buzz off fast enough.

The last big name that had to be officially confirmed was the one of Cancellara. The Swiss Bear doubted a long time about his future, but he made a decision a while ago. He could also move to Team Sky, to the new Australian Pegasus or to BMC Racing who wanted to put on some big money to strengthen the Swiss link (BMC is a brand of bikes from Switzerland). But in the end the severance of 1.83 million euro went from Luxembourg to the bank account of Bjarne Riis. (Which would mean Cancellara earned 1.2 million euro a year, since the UCI applies that a compensation like this has to be 150 % of the annual wage. Some sources talk about a compensation of 3 million euro.)

Nygaard and Andersen picked also some ex-riders, Torsten Schmidt and Lars Michaelsen, away from Riis. They both will be team leaders at their new team, just like Luca Guercilena. Luca Guercilena learned his trade from Aldo Sassi, in the training centre of Mapei, before he went to Quick Step to combine coaching and a job of a sport director. Guercilena even redeemed himself out of the Belgian team: “I had to pay a fine though to get out of the contract, but I was sure about it. I had no problems at Quick Step but I chose to keep on learning. Until now I hadn’t focused on working for Grand Tours, but I want to try to win the Tour with Andy.”

Focus on the Tour

The ambitions of the youngest Schleck should be fully manifested itself in a team built around him. After the Tour 2011-presentation Nygaard was even more convinced about the possibilities of Andy Schleck: “With riders of the same caliber of Fränk and Andy Schleck you prevail tactically since it’s going to be a race suited for climbers.”

It’s no secret the Schlecks aim for the highest stage on the podium of the Tour in Paris with this team, and they get the right help for that. First of all there are a lot of team mates coming over from Saxo Bank (think about Jens Voigt who’s a very valuable team mate), but don’t underestimate for example Linus Gerdemann. Since Milram announced to quit sponsoring in cycling, he stood often alone, but surrounded with big names he can claim a free role or work his pants off to serve the leaders. Brice Feillu wasn’t invited for the Grand Tours with his former team Vacansoleil and didn’t want risk to miss them again. With his signature for Luxembourg there were more guarantees for being part of a Grand Tour-team. If we may believe Andersen, Anders Lund is a promising climber and he can prove that by doing some good work at the front of the peloton in the high mountains.

Cancellara for the spring classics

It is obvious that this team is not only aiming for the Grand Tours. With classical riders as Stuart O’Grady and Fabian Cancellara, the needed experience is on board, but also the youngsters are eager to prove themselves in the spring races. The 24 years old German rider Dominic Klemme ended fourteenth in Paris-Roubaix and also Martin Mortensen has some potential on this surface.

Tom Stamsnijder could become a great classical rider, but above all, he’s a team player, says Andersen. In other words: he can deliver good work for Cancellara. His Dutch colleague Joost Posthuma is an all-rounder who is aiming to the spring classics in first place. Nygaard sees him score in time trials and short stage-races and expects that he will be one of the big surprises of the upcoming season.

And the other races

Bennati is the finisher of team Schleck, but he gets some help. Viganó is a sprinter but he can also lead out a sprint for a man like Bennati. Also new prof Nizzolo is a fast guy, and following Nygaard, a real superfast sprinter! Just like Nygaard, Guercilena thinks that we haven’t seen the best of Bennati yet: “I want to bring him back to his level of the Tour 2007, when he won on Champs Elysées. In the preparation of his program we have to take his Achilles injury in account. We hope he can do good in Milan – San Remo, and after that we go to Gent – Wevelgem and the Giro. He won’t probably ride the Ronde van Vlaanderen and Paris – Roubaix. His second peak should be there during the Vuelta and the Worlds.” He sees Jakob Fuglsang as a leader for the Giro: “Fuglsang has the potential to win the Tour someday, but he has to ride the Giro first.”

“I have chosen for this team because it is a new project and everybody is going to be very motivated”, explains the 26 years old Wouter Weylandt. “I had raced for more than six years for the same team, and it will be good to snuff up some new air and have new people around me.” Nygaard fully trusts him: “Weylandt is still young, but he already won stages in the Giro and the Vuelta. He can grow and become an awesome rider for the classics.” Also Maxime Monfort sees it as a new challenge: “Finally I’m a team mate of a possible Tour winner. That suits me slightly better than preparing a sprint for Mark Cavendish.”

Mercedes delivers the team cars and like this it brings an extra hint of class. The American bike brand Trek assures the Madone-frames, but also delivers the Bontrager wheels and parts. Gearing happens with the Dura-Ace Di2, the electronic group of Shimano. We think back at the last Tour, at the technical problems of Andy Schleck on Port de Balès. Is the automating of the gears some kind of a prevention to give time loss like then no chance at all?

Team leader Andersen realises the world expects great achievements with all those big names, but tries to keep off the boat: “There has to be cherished some expectations, but at this moment I stay calm. Maybe that’ll change in the future…” Manager Nygaard is less prudent in his statements: he sees both Schlecks together on the Tour-podium in Paris. The first training camp takes place in Crans Montana in the Swiss Alps, in the beginning of December. After that we will probably know more. We have to wait till January to get to see the team presentation.

hang on... isnt Stuart O'Grady part of team Luxalicious too???

I only saw 1 picture with Andy not smiling and a Vid. that wasn't very cheerful, but I think on your first/head picture, Andy is sitting on top and smiles. I don't think we should give him a depression just by his looks on photos. I think he's allright and just/maybe a little bored with all the hassle of stalking and the doping issues of Conti..

I was confronting with previous years pics and others people there. Never talked about depression. When younger Andy seemed smiling to every cameras... we were a bit spoiled.