A night on the glacier

"The sunset in cranes-montana" tweeted Jakob today posting that pic "Having dinner in a chalet tonight...best camp ever!!" They walked atop a mountain this morning and spent some hours skying and snowboarding. You can feel the peace of the night falling in the solitude of a refuge. 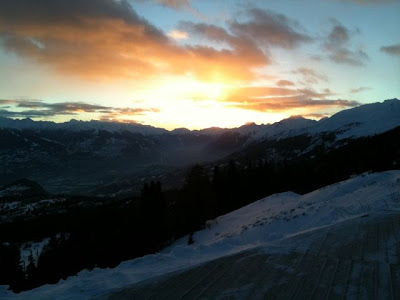 I adore skiing and ski mountaineering specially – you know, climbing a mountain by (synthetic)sealskins – As I have told you before, in a previous life I was supposed to go to live on a small village on the Alps and I could share with you a lot of adventurous stories.

Jakob's pic made me remember about the day I seriously risked my life on the glacier up passo del Tonale. My ex and I had left our camper at the start of the cableway, reached at the top of the famous 'black' track and then climbed the 'blue' and the 'red' ones with our heavy backpacks on our shoulders. People looked at us like we were aliens.

The weather was wonderful, the snow perfect. The first part of the ascent was almost a plateau, the second one was much harder and there were some rocks on the top. My ex is a good alpinist, much better then me, but taller and heavier. On the other side of the glacier, the wind had formed an ice crust and he was a bit a bit nervous so we waited, just looking at the amazing stretch just in front of us. It was late, the tracks were already closed and it was dark down in the valley, but atop the sun was still visible. But it was January, when days are short so we had only a little bit of time to reach a safe place to put our tent, and for that we needed light. - "Lets go!" - I said and bravely (perhaps irresponsibly) attacked the icy descent.

I am light and short so basically I was floating on the snow surface: what fun! I went down so fast that I believed myself to be flying! Behind me my ex was angry because he needed to use his full attention and be careful to avoid breaking the ice and falling in the fresh snow. The sun was setting and around us all was turning pink. Definitely we didn't have the time to fix our tent... or better: we could because it was full moon that night. If you have never been on a glacier in a full moon night you can't understand but if you ever have ... you know that a silver-bleau light enshrouded us magically and the silence seemed unreal. We stayed a long while there simply looking to the sky, crazily crowded of stars, our backpacks on the snow, breathless.

And then we realized how incredibly hungry we were. We knew there was a refuge at the top of the mountain, but it was closed for winter (of course!); thankfully we managed to get into the winter room and slept there. Before sleeping we ate a soup prepared in melted snow on a camp stove.

It wasn't enough I guess: in the morning we had some crackers and chocolate for breakfast and started our way back, but it seemed never ending to me, in a few hours I was exhausted. My ex was angry again but for the opposite reason that time: I was way too slow!

Finally I felt completely empty with no way to go on. We were in the hardest section before the top of the range, the sun was setting again and I was blocked. The ice crust were still there but it wasn't fun at all. My ex had already taken my backpack and was dragging it in the snow: "Take off your ski's" he said "and give them to me. You'll be faster, the top is just there." He was right but my mind was lost, I was panicking a bit – that's rare to me, really! - so I didn't want to. "Give me your ski's" I said no, but remained there and the night was falling again.

He was angry, I was too tired. Suddenly two alpinists arrived from the glacier: I saw them climb the mountain quickly. In a few moments they were here: "Ah!!" one said bending his head "Bringing a girl to the glacier!!" I had no time to get annoyed: they simply took my ski's and I almost ran on the icy crust to the rockytop. My ex was furious!!

I was alive, but the adventure hadn't ended yet. My ex – maybe in revenge – left me there under the pretense of looking for his sunglasses, lost in the crossing of those fucking last meters. He left me there, alone in the dark, atop a mountain with a long hard descent to do. And told me: "Go ahead, I'll come". No moon in the sky, it was cloudy. And I was almost safe but almost frozen. The two alpinists were already far down on the track: they had asked if we wanted to go with them but my ex said no – why no? He was jealous, my man! So... I had to go alone.

It was terrifying but also so cool: I was the only human being atop that mountain and could see under me the weak lights of passo del Tonale. To reach our camper – and a restaurant hopefully – I only had to ski in the dark a 'red' track, an easy plateau and finally one of the most difficult 'dark' tracks of the Alps, also used for World Championship. "Ok,"I thought to myself, "I can do that."

I started carefully, my backpack on my shoulders again, trying not to fall, forcing my legs to stay strong and using my eyes to read the ground. I assure you it wasn't easy. I was at my limit but kept telling myself that maybe the cableway was still open because... YES!! there was a red light and a friendly noise on the track!! A snowmobile!! YES!! The worker there must go down so he was going to use the cableway, right?

He almost drove on me. He stopped, got out and stared at me with a very surprised expression on his face. But I was glad to see he was a young, nice, (and cute) guy. He was also very worried and even if I didnt want to be a bother, he thought it was better for me to sit and warm up a bit in the snowmobile while he finished his work. To be honest, I was too tired to protest. I wouldn't have stopped knowing that the cableway was closed and he was going go ski down the 'black' track, because after that short rest I was warmer but my legs muscles were colder...

Anyway, when my ex came back and found me there, he wasn't happy at all. I must say that the worker too wasn't happy to meet my ex... and almost incredibly he had found his sunglasses!

After parking the snowmobile the three of us walked together, going down the track fast and with a confidence that I never had before, but had just learnt. The nasty beginning of that track had been just enlarged but still it was hard, icy and...dark. But after everything I had been through in the last 48 hours, truly, it looked easy.

My face looked white (or maybe green) when we entered the restaurant, half covered in snow, with two dirty backpack and only the 'shoes' inside our ski boots. I got a bowl of hot soup and some worried looks by the owner: she thought I should be going to the hospital. But after that soup I felt fine. My ex was still angry, but I was proud.

how faaaaabulous is your Editor?! ;)