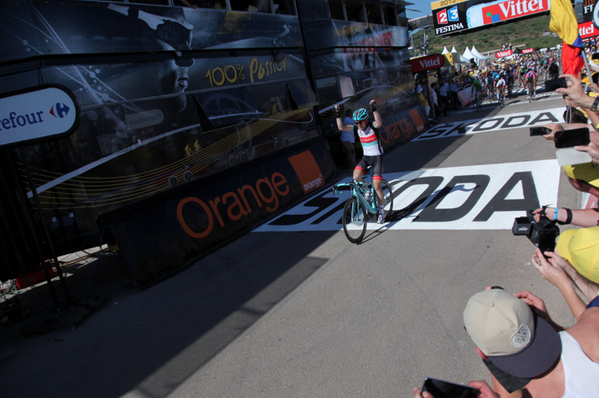 It was a tricky stage, it was a stage you must interpretate. In add, dued to yesterday chaos (all classed with the same time) today winner was likely going to get the Yellow Jersey and 1 second of advantage was enough.

There were three climbs not very hard and not very well placed because the hardest (2nd cat) was far from the finish and the last one, short but nasty, was still 10 to go. It was stage for punchers, for gamblers, for believers. You must believe it can happen to make the miracle true.
Not a miracle though but a wise long calculated work decided today winner. And a bit of good luck. And a lot of guts. On paper Peter Sagan was the favourite: a sprinter able to climb while the pure sprinters were in troubles since the first easier climb. Some of them kept fighting - Greipel - some others just gave up - Cavendish - a few were in the middle with the Yellow Jersey Marcel Kittel. He lost more than 9' today but you can't say he didn't try to resist. He simply couldn't. On the road the favourite was Peter Sagan again.

The early break-away - Perez, Boom, Veilleux and Kadri - was controlled and caught. Kadri was the last one to capitolate.
Team Europcar was expected to animate such an open stage and it confirms the expectation: Voeckler first - and twice - then Rolland - who managed to secure the Polka Jersey - eventually Gauthier in the final kms - Froome himself chased him from the peloton already launched toward an uncertain half-bunch sprint. Bravo Europcar that made the show - Voeckler's faces... can't help it! - and also the gain.
Corsica was stunning again: from the blue crystalline sea to the harsh mountain peacks and waterfalls. The road was beautiful too. Hard to swallow for fast guys but not hard enough to make a big selection in spite some teams - Cannondale but also FDJ - set a very high pace. Maciej Bodnar worked all day for Peter Sagan and that meant pain for many people behind.  When the race took the way down to Ajaccio there were still a 100 riders in the front group.
On paper it was a sprint finish or at least a solo win by a crazy finisseur attacking on the last short climb, rocking the descent - very easy though - and enduring the flat till the line. Instead, against all expectations, a six riders break-away formed in the true last kms and they were good ones: Fuglsang, Flecha, Izaguirre, b-day boy Chavanel, Mori and RSLT Jan Bakelants. 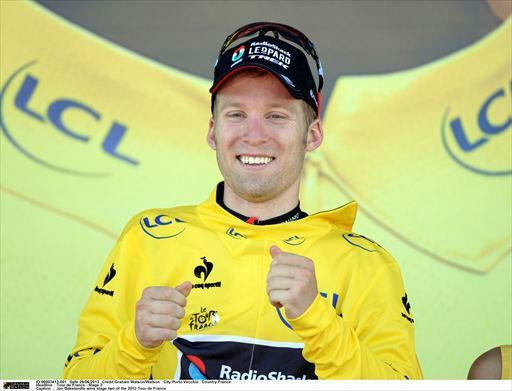 Watching the race for Andy Schleck I had noticed that RSLT's guys were constantly in front, Andy included. He were riding very well, especially on the climbs, where he was almost in the first row, almost too much in the wind. They were riding like a compact group, contributing to the high pace and without saving energies. Not only to keep Andy safely in front. Indead, they spent the day preparing the attack and when it came Bakelants was ready.
It was close to the finish, the break worked well but still the peloton was already launched for the sprint and they gave up. Not Jan Bakelnts: he turned a few times, then open the gas. He went away solo like in a race against the clock or against a written end you don't accept. He wrote his own end. He took that victory against all the peloton sprintint 1 second at his back. For that second he took the victory and the Yellow Jersey.
Andy Schleck happy and panting went to give him a big hug after the finish. "NO ONE expected that!" he wrote on twitter "but there were 8 guys they knew what you got in your legs!!! f.... nice job @Jan_Bakelants proud of you mate".
Peter Sagan won the sprint. But there was that man 1 second ahead: Jan Bakelants.
PS
Tweet of the day:
Team Sky ‏@TeamSky: Keep your dogs off the road! #Doggate #TDF
A dog crossed the road just in front of the arriving peloton, something like 5 km to go. No consequences fortunately.
PS
Maybe it's just me but RSLT is a different team since when Becca decided to sell the license. It looks as if all the energies and qualities present in the team are suddenly breaking free.